The large-scale development of the cryptocurrency industry allowed the use of Bitcoin outside of its own blockchain. At the moment of writing, the volume of blocked Bitcoins in the Lightning network is 1100 coins, and 2600 coins are locked in the Liquid Network. With the growing popularity of decentralized finance, the demand for Bitcoins on other platforms also increased. 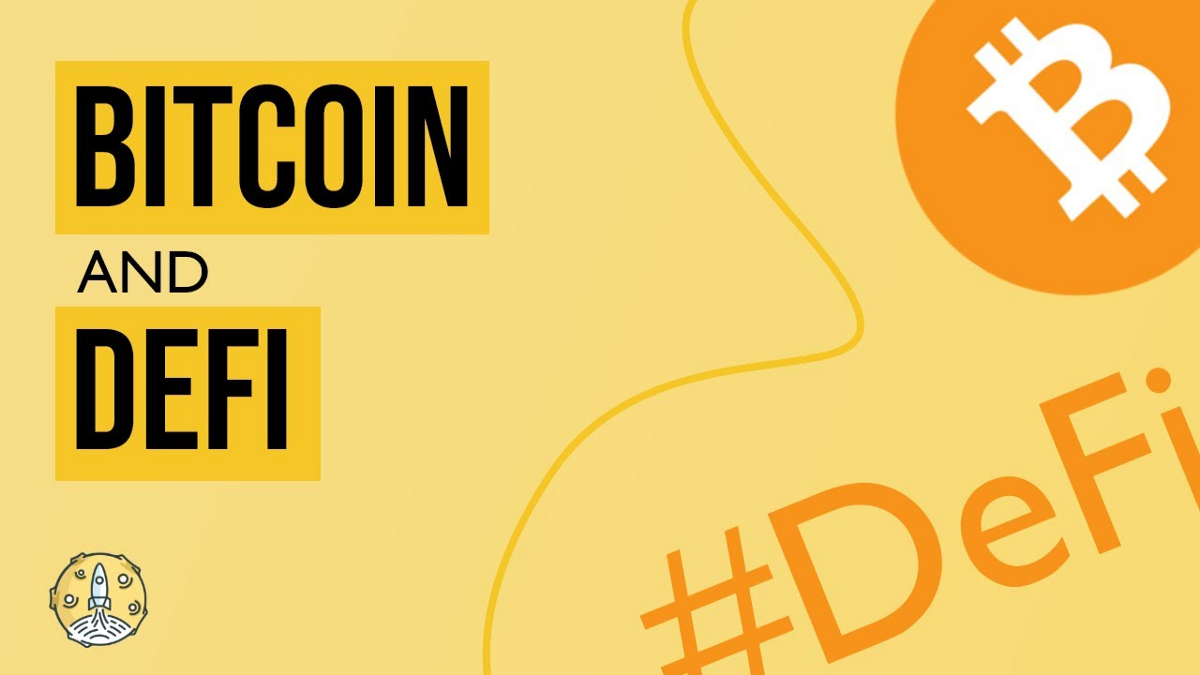 In today’s article, we will talk about Bitcoin-backed tokens, their interaction with DeFi infrastructure, design, and future prospects.

Bitcoin tokenization is the creation of security-tokens with real value, that is, Bitcoins. These tokens can be used to transfer ownership, trade or interact with DeFi services.

In 2015, Blockstream introduced its federation-governed Bitcoin-based Liquid Network Sidechain, which acts as a payment network for market participants. The L-BTC internal dummy token is used for transactions, reducing the time required to move deposits from 60 to 2 minutes.

Liquid Network is designed to solve the problem of Bitcoin network scalability by creating a sidechain, partially independent from the main blockchain.

From a technical point of view, it was always possible to use and create smart contracts on the Bitcoin network. An example of creating a smart contract on the main network of Bitcoin is a bet concluded between two developers on the U.S. presidential election results. This approach was made possible thanks to Discreet Log Contracts (DLC), which allows parties to make transactions related to future events.

Another example of the use of smart contracts in the Bitcoin network is RSK Labs, which has developed a two-way Bitcoin-linked smart platform that embeds smart contracts into the network to increase the value and functionality of the ecosystem. The operating principle of the platform is similar to Liquid. The RSK allows users to send BTC directly to the Rootstock chain using a two-way peg, where the Bitcoins are locked and exchanged for the SBTC internal token.

But despite active Bitcoin smart contract development, Ethereum remains the leader in this area.

The reason behind the demand?

Today, most DeFi services are based on Ethereum, while Bitcoin acts as a runner-up. If Bitcoin can be used in sidechains, it can be used in other blockchains as well. Thus, there is a demand for solutions to use Bitcoin on the Ethereum network, which led to the appearance of tokenized Bitcoins.

The capitalization of the entire DeFi market today is about $ 16 billion; the number of USD blocked in DeFi is about $ 11 billion. At the same time, there are 141 thousand Bitcoins locked in numerous DeFi projects. 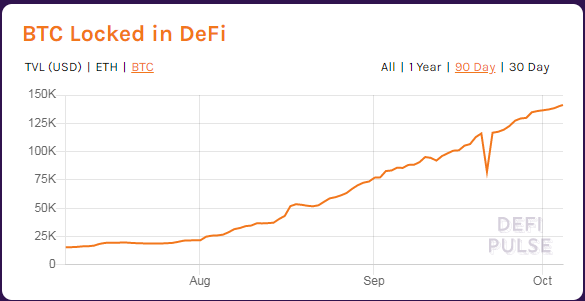 To increase the efficiency of Bitcoin as a means of payment, it can be used for settlements when interacting with DeFi services. Such projects have been in existence for many years, but they have only recently become widespread due to the increased attention to decentralized finance. Even now, the number of Bitcoins blocked on Ethereum is 50 times higher than the funds locked in the Lightning network; and this number continues to grow.

Bitcoin tokenization capabilities on platforms such as Ethereum have different levels of decentralization and trust. Bitcoin spreading to other networks increases its scope and allows its use in different types of decentralized applications.

Protocols such as Lightning Network, Liquid, and RSK improve the infrastructure of the Bitcoin network, and protocols for Bitcoin tokenization on other platforms, expand the financial possibilities of their holders.

In early 2019, Wrapped Bitcoin (WBTC), the Bitcoin-backed token, was introduced. WBTC enabled Bitcoin holders to use smart contracts on the Ethereum platform.

WBTC is an ERC20 standard token with 1: 1 Bitcoin binding used to pay for smart contracts. WBTC provides an opportunity to obtain BTC-backed loans using DeFi-services. By providing liquidity in Bitcoins, users get access to DeFi applications, thus expanding the functionality and scope of the Bitcoin network.

The WBTC capitalization is almost $ 1 billion, which makes it the leader among BTC-tokens on Ethereum and the fifth among DeFi tokens.

A substantial disadvantage of WBTC is the fact that it requires trusting a third party. WBTC is built on the consortium model consisting of proven organizations. The WBTC ecosystem consists of custodians, merchants, and users. It is the custodians who exchange BTC to WBTC, manage a multisig BTC wallet, move and create WBTC on Ethereum. Also, to conduct the trade, the user must follow a KYC procedure in order for the user’s Bitcoins to be transferred to the custodian, who then should release the equivalent amount of WBTC.

The main value of cryptocurrencies is their trustless and decentralized approach allowing them to avoid dependencies from third parties. This is the reason why tBTC – the ERC-20 token backed by BTC – was created.

tBTC is a project from Cross Chain Group, built on Keep Network, which allows you to contribute your BTC and create Bitcoin tokens on Ethereum bypassing intermediaries and KYC. The tBTC protocol operates using a multi-signature wallet and releases tBTC after the deposit is confirmed.

In May 2020 tBTC sidechain was launched, but two days later, they had to stop accepting deposits due to a discovered vulnerability. On September 22nd, the sidechain became available on tBTC network.

DeFi projects and DEX’s such as Maker, Uniswap, Compound, Balancer, Kyber, 1inch, and others supported the tBTC sidechain launch. A tBTC pool, designed to increase liquidity and reward early tBTC miners, was launched on Curve Finance.

In addition to WBTC and tBTC, the market offers such Bitcoin tokens as imBTC on Tokenlon, renBTC (Ren), BTCB (Binance), sBTC (Synthetix), and others.

imBTC is a tokenized Bitcoin for working with smart contracts on the Tokenlon platform. imBTC holders can exchange their tokens and receive income from platform commissions by holding imBTC.

Solutions from Ren allow transferring liquidity between Bitcoin, Ethereum and Bitcoin Cash, while the release and burning of assets are done with the help of smart contracts. Among tokenized Bitcoins, renBTC ranks second after WBTC, boasting $ 270 million volume.

BTCB is a Bitcoin-backed BEP2 token functioning on the Binance Chain network.

sBTC – “synthetic” Bitcoin from the developers of Synthetix DeFi-protocol.

In the last six months, the number of Bitcoins in the Ethereum network has increased more than 30 times. Taking into account the fact that the capitalization of Bitcoin is almost $ 200 billion, and market dominance around 58%, we can say that the emergence of Bitcoin-backed tokens is to attract additional liquidity to the DeFi ecosystem. 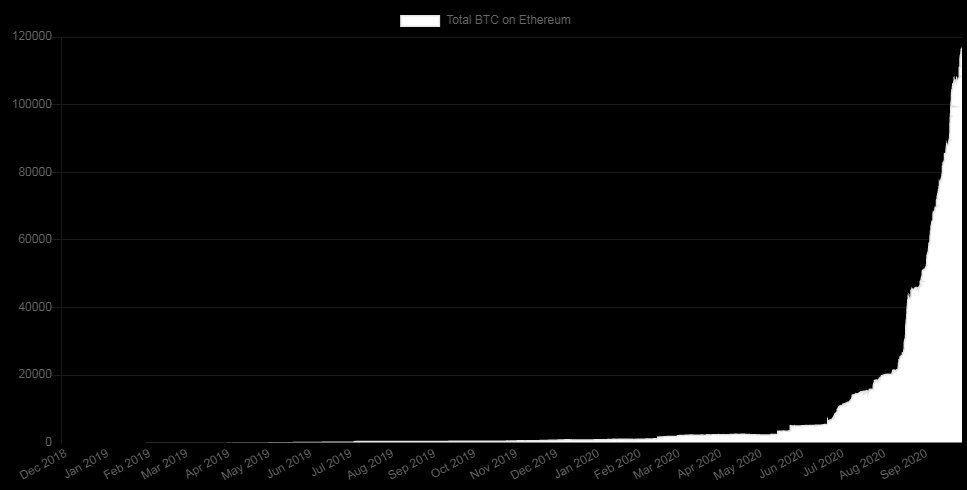 On the other hand, bridging Bitcoin with the DeFi sector provides a whole range of new opportunities. The fact that Bitcoin was integrated into Ethereum, and not vice versa, is an indicator of Bitcoin’s value as a financial instrument. For this reason, the process of Bitcoin’s integration towards other platforms will only accelerate.