Polkadot: building Web 3.0 from the inside

One of the main obstacles to solving the problem of scalability of blockchain networks is their inability to effectively interact with each other. The problem of interaction between different blockchains is solved by creating and applying various bindings, like sidechains, building bridges, ensuring interaction with smart contracts, conducting atomic swaps and other solutions. 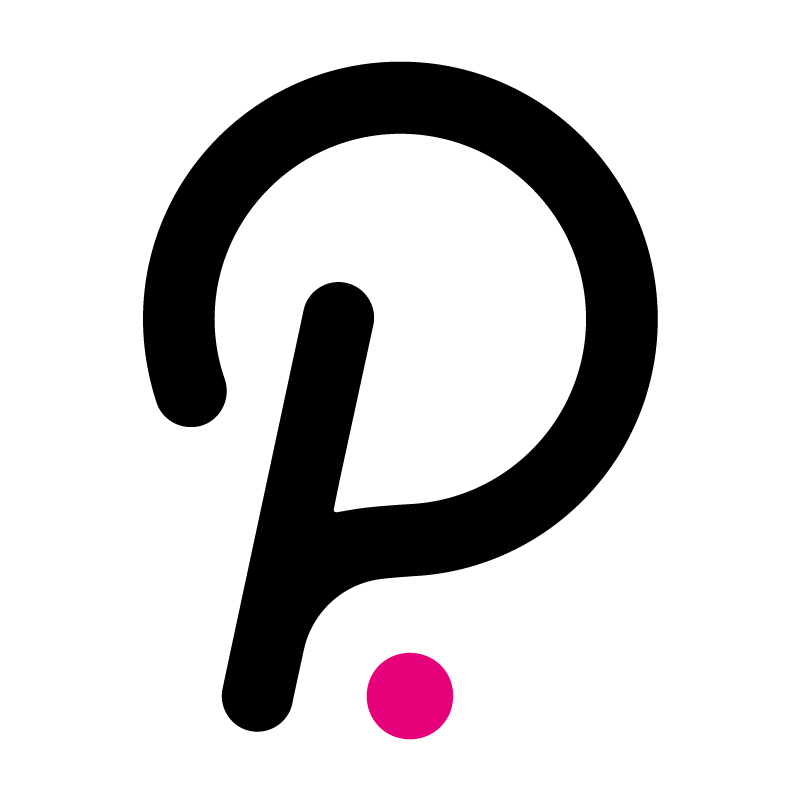 In today’s article, we’ll talk about a solution like Polkadot, which already provides interoperability between various wallets, projects, tokens, oracles and DeFi platforms. We will analyze the advantages that the protocol provides, how it provides communication between different blockchains, and also consider how useful it can be in the context of the development of blockchain technologies and the construction of decentralized finance..

Key features of the network

Polkadot (DOT) Is a protocol and ecosystem for building and combining different blockchains and enabling them to communicate effectively with each other. Polkadot allows different platforms to scale by integrating with each other and provides such functions as:

The number of blockchains developed for the needs of certain fields of activity is growing rapidly. All of them have their own technical features and implementations, and can also be based on different mechanisms for reaching consensus. To overcome such inconsistencies and ensure consistent operation, Polkadot combines separate blockchains to perform mutual operations, and the optimization of blockchains for specific tasks occurs due to the sharding model developed by them. Polkadot is based on Substrate – a protocol for creating blockchains, and programming languages ​​are available to a wide range of developers.

The security and interoperability of networks is achieved through the relay chain – the main blockchain. This main chain interacts with sharded parachains – separate blockchains with their own tokens. 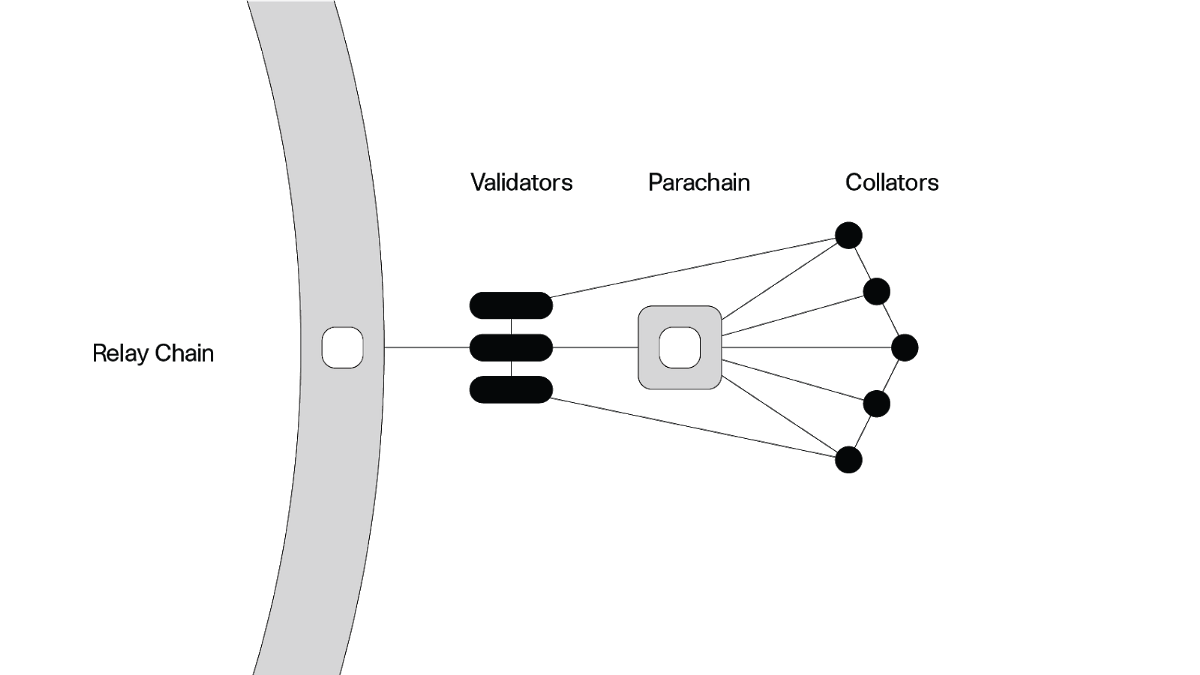 One of the main tasks that the protocol provides is the transfer of value from one blockchain to another, while each of the blockchains has its own token with its own tokenomics and its own mechanism of functioning, and the implementation of the relay mechanism for transferring value is achieved by building the already mentioned separate blockchains – parachains.

In addition to providing interoperability within the network, Polkadot allows you to “build” bridges with networks such as Bitcoin and Ethereum. So, the startup Interlay published specification, according to which PolkaBTC will soon be presented – a wrapped bitcoin in the Polkadot network under the security of the internal token of the DOT network.

The construction of a bitcoin parachain and the implementation of a token with BTC support will be carried out through the use of an asset creation platform XClaim, to issue and redeem BTC-enabled tokens. 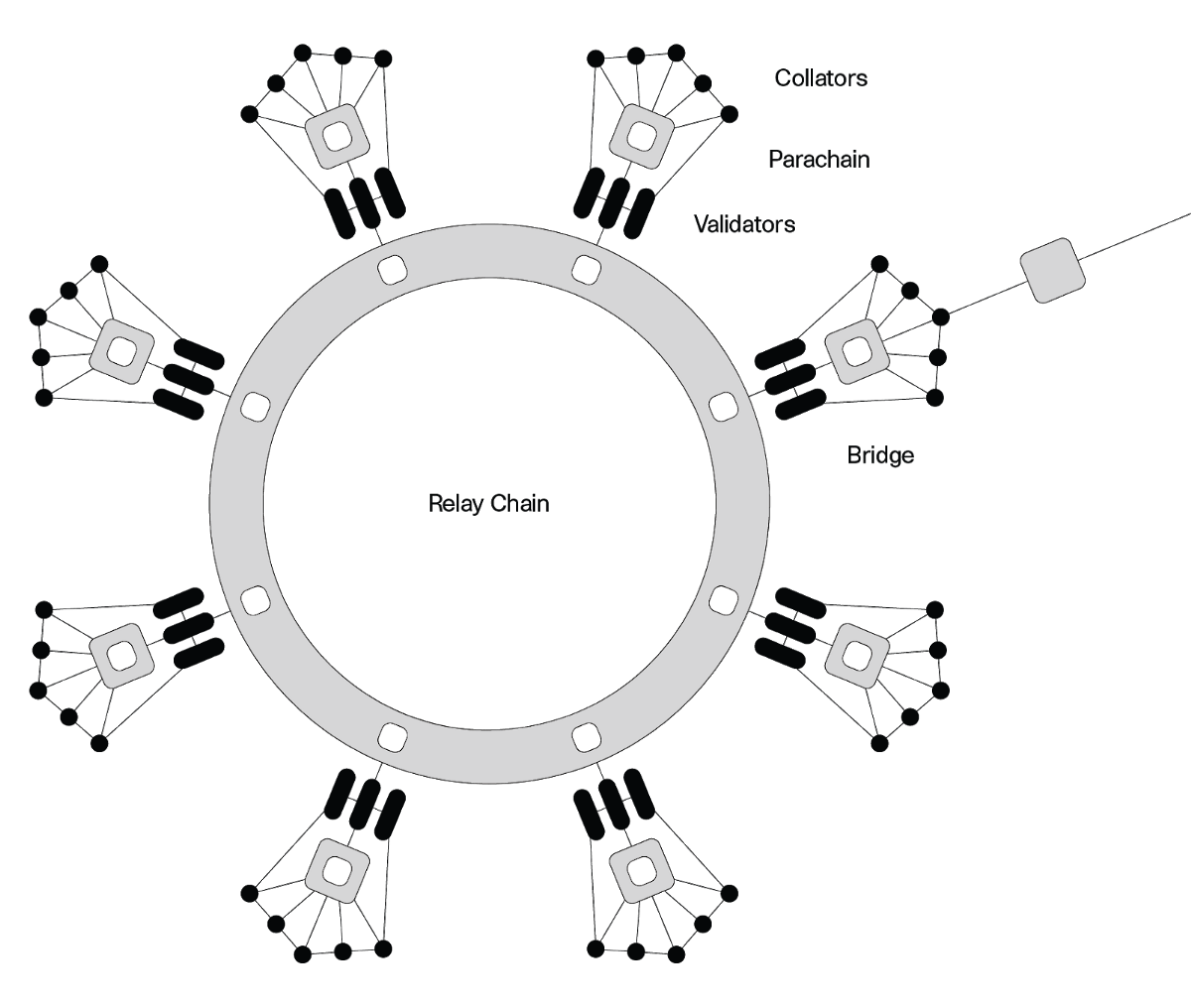 At the same time, three different bridges are being developed between the Polkadot and Ethereum blockchains using Parity and Substrate..

In addition to providing the internal DOT token, it provides its holders with the ability to act as validators for network management, such as changing fees, updating, adding and removing parachains, and other features. The DOT token powers Polkadot as its blockchain uses a modified NPoS consensus algorithm. 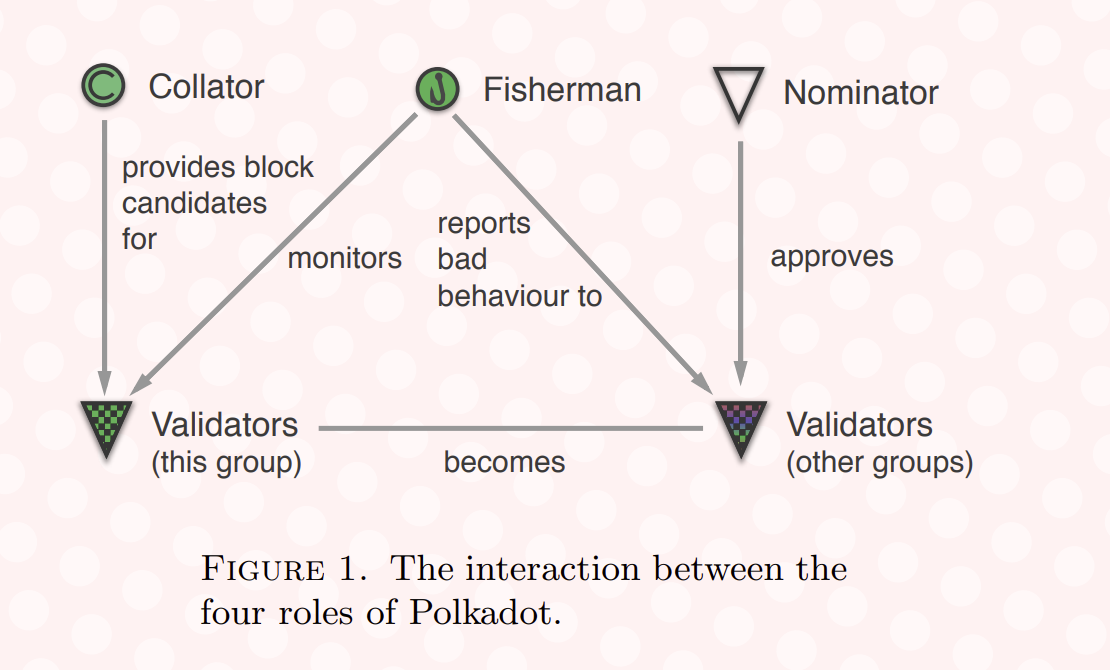 In addition to validators, the network is managed by so-called nominators, who ensure the safety of the relay chain by choosing reliable validators. By casting a vote for the validator, nominators delegate their own tokens. Part of the rewards from blocks mined by validators go to nominators for providing their funds.

Network management also involves collectors who help validators create valid blocks of parachains, maintain full nodes, provide the ability to create new blocks or execute transactions, and fishermen, who can be full nodes or collectors, who provide control over malicious activity on the network..

At the moment, Polkadot supports a limited number of parachains (about 100) and therefore offers several ways to distribute them:

The limited number of parachains is due to limited resources to ensure and maintain their security. System-level parachains are defined by a non-profit organization Web3 Foundation and, for now, these include the Bitcoin-Polkadot and Ethereum-Polkadot bridges, as well as the Wasm smart contract creation and use platform – Edgeware and some infrastructure projects.

Kusama (KSM) is the Polkadot canary network, an early unaudited version of the protocol, on which new updates and modifications are being rolled out. Although both versions of the protocol share a common code, they are independent networks. Kusama has different protocol control options, so updates and voting are faster. 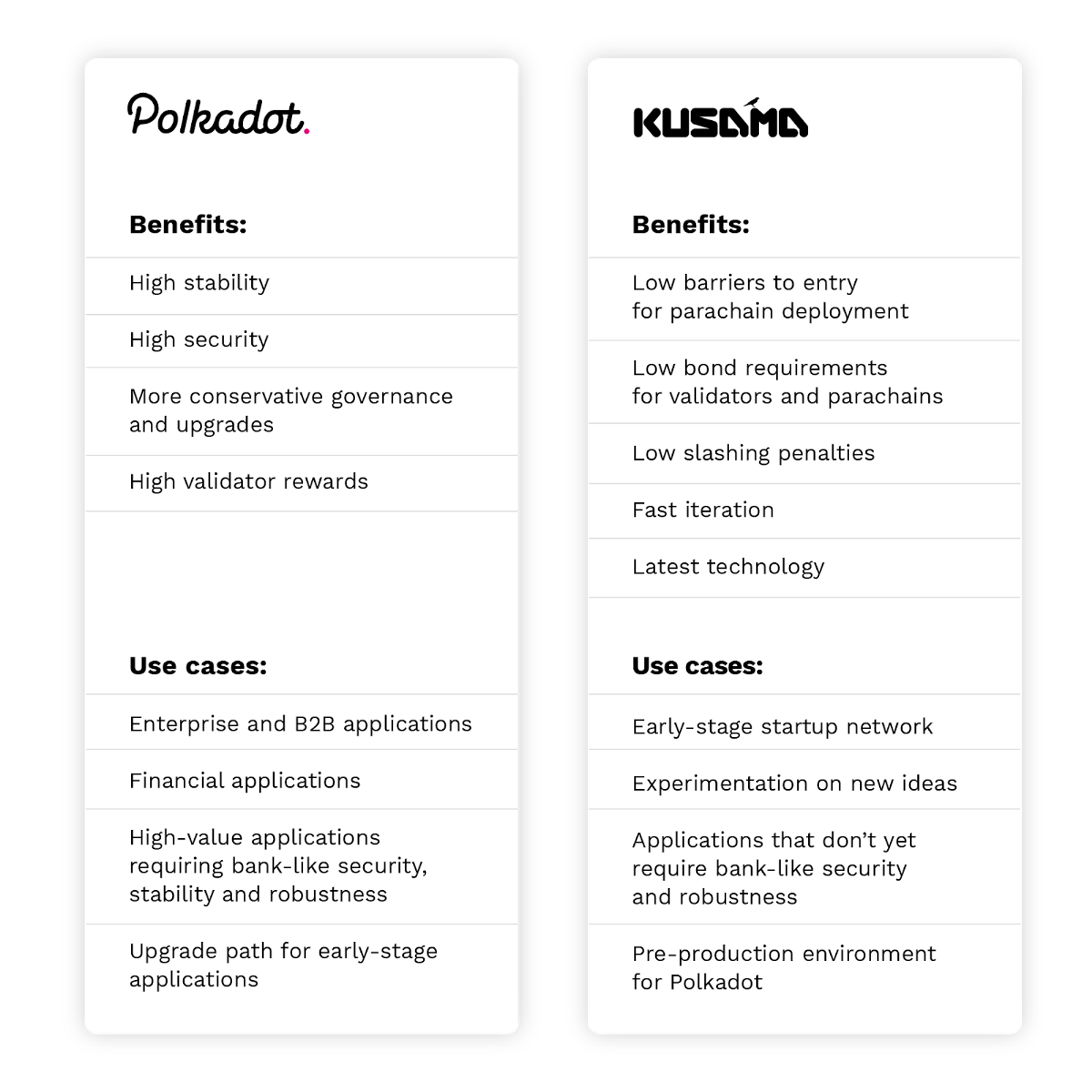 Kusama also has its own token and also provides platform management roles. Kusama is a kind of “testing ground” for various experiments in a safe environment.

Test network Rococo, Launched in December 2020, it is a public network maintained by Parity Technologies and Polkadot developers to test the alignment and interoperability of parachains. Rococo network launched on the basis of Proof of Authority (PoA) – proof of authority, where the network operates at the expense of validators. 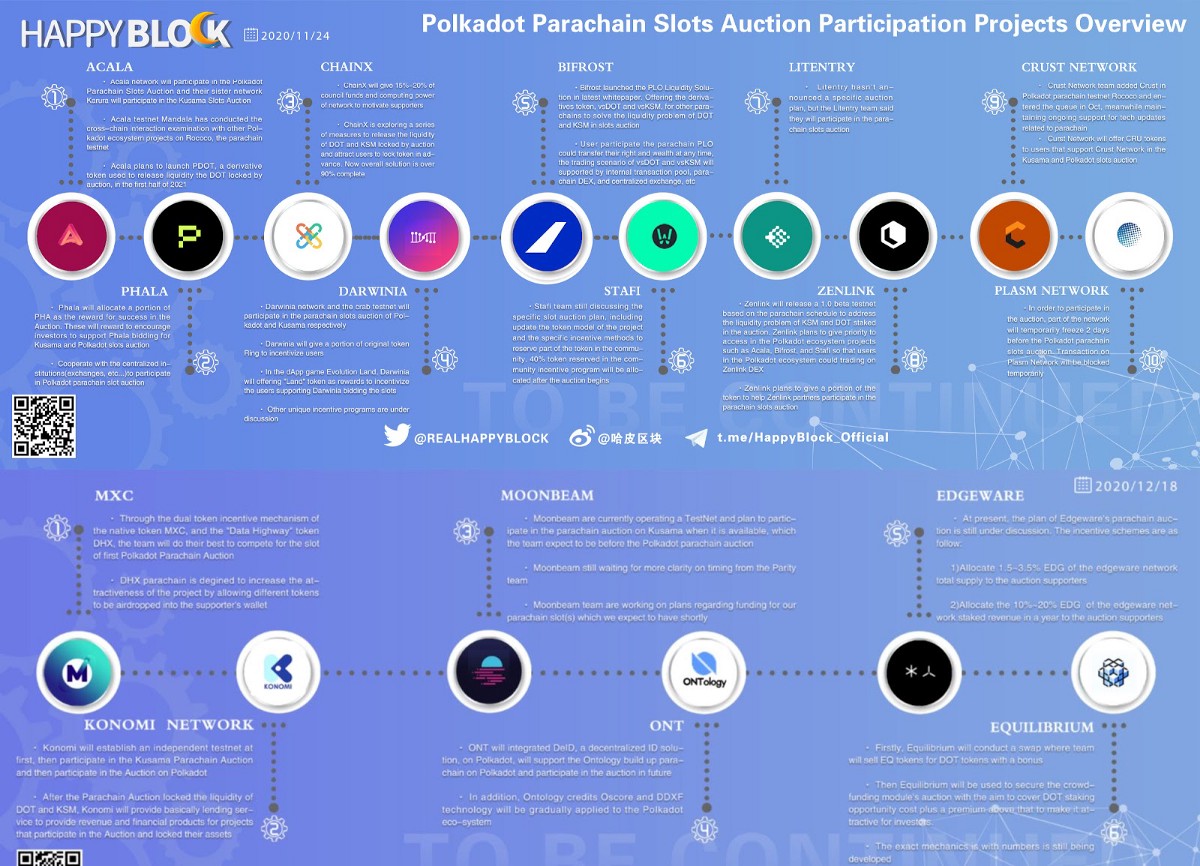 The official release of the Rococo network also means that the Kusama network and the main Polkadot network are launching auctions for parachain slots. Projects such as Acala Network, Ontology, ChainX, Edgeware and others have already announced their participation..

At the time of this writing, according to the portal Polkaproject, Polkadot ecosystem&Substrate consists of 349 projects, including a data delivery protocol using oracles ChainLink, Ocean Protocol decentralized data exchange, Celer Network scaling platform, imToken and others.

Also, on January 21, LD Capital launched the Polkadot Ecosystem fund, about which she reported on his twitter. The fund, which manages $ 10 million, will build a community for development in various directions. 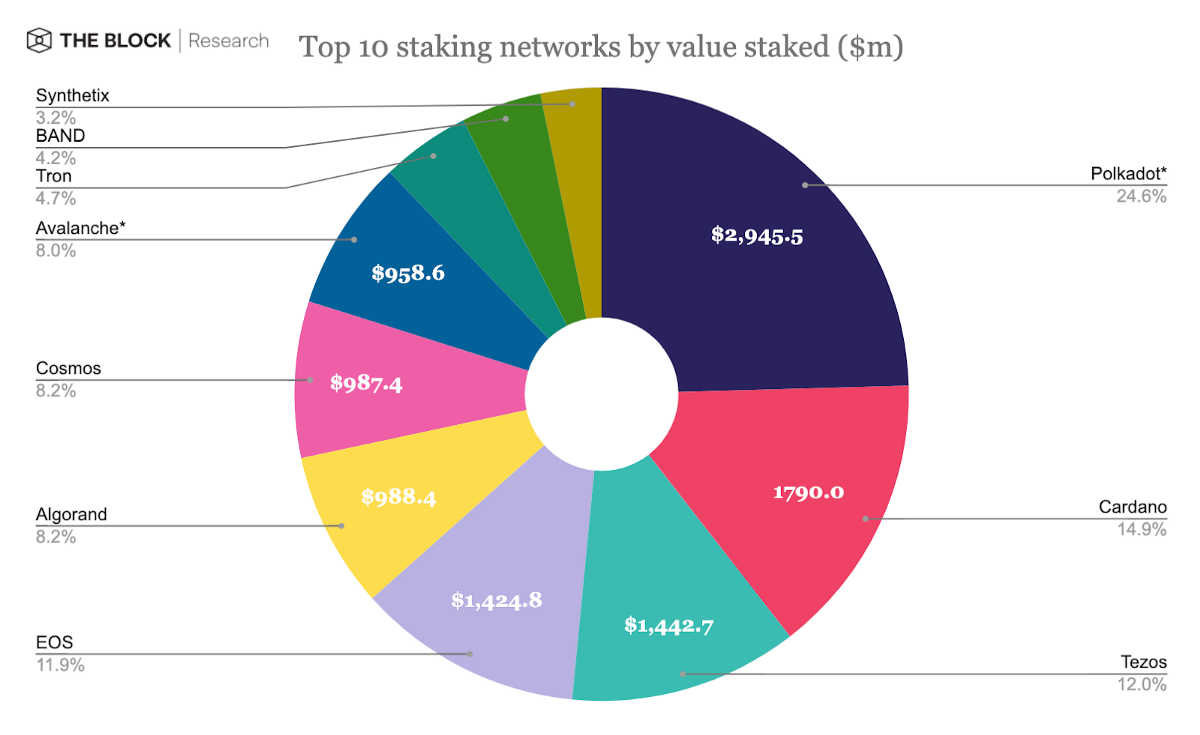 It is also worth noting that the DOT network token has moved to the 4th line in terms of total capitalization with a value of almost $ 17 billion, thereby overtaking XRP, and the token price has more than tripled in a month. Also, according to research The Block, just under $ 3 billion in staking tokens blocked on the Polkadot network.

Polkadot is deservedly the second most active DeFi ecosystem after Ethereum. The developers are already at this stage conducting research on the creation of a new version of Polkadot 2.0, which is designed to solve the limitations that the network faces at this stage of its development..

Note: Trading cryptocurrencies is inherently risky, and while the returns can be quite high, it is important to keep the risks in mind. If the price of the asset you are trading drops sharply, you may lose part of your investment, being forced to sell the asset at a lower price. 3Commas Blog Posts are written for educational purposes and should not be construed as “Financial Advice”.

Mike Owergreen Administrator
Sorry! The Author has not filled his profile.
follow me
390